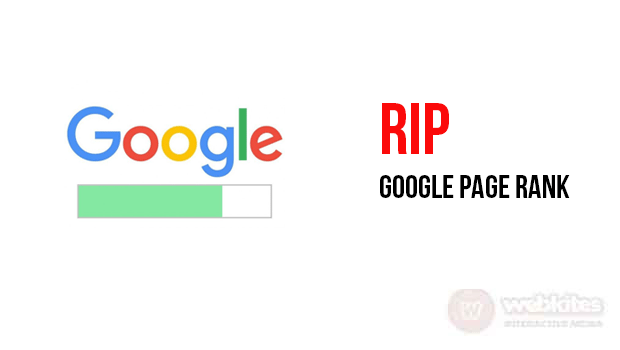 Google has confirmed that Google PageRank has been removed from its browser. If you are using any online tool for showing PageRank or a browser that displays PageRank, within couple of weeks it will not show any detail or data at all.

What is PageRank (PR)?

PageRank is determined by Google to identify the webpage’s reliability, importance, authority, and uniqueness of content according to the Google’s terms and conditions.

Below comes the image that explains how the PageRank will be displayed in the Google Toolbar.

Google says that the company will still use the PageRank within the Google ranking Algorithm, but PageRank will not be displayed externally neither in the browser or toolbar.

For the several years Google have not updated the PageRank in Toolbars and browsers and finally it has stopped the Page score from Toolbars.
For the Search engine marketers it is the best tool for rating their own webpages too.

Webpage with the highest score is not considered as best for all the topics, perhaps it satisfies the Google’s terms and conditions.
People need better PageRank to improve their rankings so they want links. So the link-selling wealth emerged.

Due to this the link-spam began. People run at the back of PageRank score by dropping their links in blogs, forums and in social media. These yields in link-spam. Google was in a situation to solve this issue so in 2005 Google getting behind the nofollow tag that stops the links from passing along PageRank. Even though the nofollow tag has been used link-spam have not reduced.

Again it got suffered when Google launches its Chrome browser. Firefox dropped the PR toolbar in 2011. After that Google took ten months in 2013 to update the PR scores, it was feeding into the Internet Explorer users.

After that there is no update of PR score.

PR score in Google search console was dropped in 2009. After 2010 there was a slow death of PageRank.

It was an awful situation for SEO marketers and for the whole web world.

At last with the PR goes away we can enjoy the peaceful web where no one drop the link or comments and make the web world Spams. Therefore, no PR score and no pressure about dropping links.

If you wish to learn more about the latest happenings around web world, Visit www.webkites.in to read more.