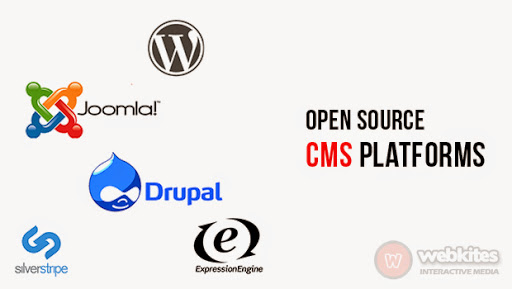 CMS is a Content Management System that helps the user to edit or manage the content on the website of his/her own.
Some of the open source CMS platforms are:

Joomla is one of the open source CMS used for publishing content on the web. Joomla was initially released on 17 August 2005. Joomla is considered as an award-winning content management system. The latest version of Joomla is 3.3.6. Joomla was used by more than 200,000 users and contributors. There are more add-ons and plugins for joomla.Joomla has more than 7000 extensions. Joomla is easy to install but it is not easy as WordPress.

Drupal was initially released on January 2001. The latest version of Drupal is 7.31. Drupal is used as a back-end framework. It is easy to install on any web server and it is flexible. Drupal is developer friendly. Drupal runs on any platform that supports server running on PHP and a database. Many companies provide commercial support to Drupal. It is developer friendly, but it takes slow loading times.

If you wish to develop websites with open source platforms, please mail us at support@webkites.in or visit www.webkites.in